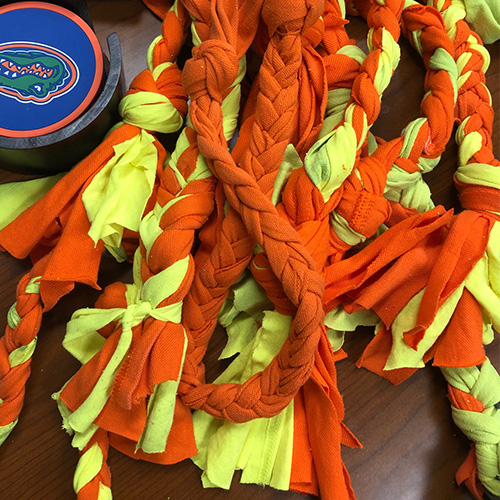 O’Connell Center staff give back to local furry friends

If you’ve ever spotted bright yellow and orange uniform shirts on campus, you may know that the individuals wearing them comprise the Stephen C. O’Connell Center’s event staff.

What you may not know is that older versions of these shirts are being given new life as dog toys for local animal shelters, thanks to the sustainability-minded thinking of O’Connell Center accountant Debbie Lescault and planning by former O’Connell Center employee Tiffany Griffith.

Late last month, the Employee Relations Office at the O’Connell Center opened its doors for the third dog toy-making event. Interested UF employees volunteered their time, gathering for the afternoon to cut old uniform shirts into strips and braid them together to create rope toys.

When the O’Connell Center upgraded its event staff uniforms in 2016, its Employee Relations Office found themselves with a multitude of old T-shirts that could not be donated because of security reasons. That’s when Lescault came up with the idea to turn the old T-shirts into dog toys. Using videos online and other resources, Lescault, Griffith, who now works at the Career Connections Center, and the team learned how to make the toys and got to work.

The Employee Relations Office coordinates each dog toy-making event in conjunction with its goal to complete one or more service projects each year.

“We look for various organizations to support and ask our employees for feedback about what they would like to do,” said O’Connell Center Director Lynda Reinhart. “Projects benefiting animals frequently come up.”

Over the past three years, UF employees have made and donated more than 350 dog toys to Gainesville animal shelters.

“This opportunity is so rewarding because it’s fun for people to come together and work as a team for the greater good while giving back to our animal friends,” Reinhart said.

Story written by Sarah Bartholemy of UFHR Communications and Worklife