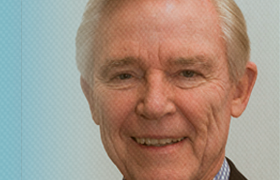 David Colburn, Ph.D., joined the University of Florida history faculty in 1972 and went on to serve as chairman of that department from 1981-1989. He later assumed the role of vice provost and dean of the International Center at the UF in 1997, a post that he held until 1999 when he was named provost and senior vice president. Colburn stepped down as provost in 2005 but actively continued his teaching and research which focused on politics, race and ethnicity in Twentieth Century America. He was named Teacher of the Year on three occasions.

He has served as a distinguished lecturer for the Organization of American Historians, been a Road Scholar for the Florida Humanities Council and is a past president of the Florida Historical Society.

As a Vietnam veteran and a prominent American historian, Colburn believes deeply in the importance of strengthening the nation’s democratic institutions — a mission he tackles each day as the director of the Bob Graham Center for Public Service. Colburn took the helm of the thriving center in 2012, and under his leadership, the center has introduced or expanded several civic engagement opportunities for University of Florida students.

[nimbus_row]
[nimbus_column column_number=”6″]
We sat down with Colburn to get his take on the upcoming presidential election, Florida’s influence as a battleground state and the role that young voters will play in the election outcome.

Hillary Clinton and Donald Trump have elicited a great deal of animosity among the American electorate. Why is that?

The disassembling of the Republican Party has caused much of the political intensity that we have seen in this campaign. The party has struggled to define itself in the face of Donald Trump’s candidacy. Trump’s candidacy is principally about personality, leaving the party to struggle with defining itself on the issues, and there is not uniform agreement on what issues should define the party of 2016. Party leaders would tell you Trump would not have been their pick, and it is for these reasons that they would make this statement. Hillary Clinton poses her own set of challenges for Democrats, but not quite in the same way. Issues raised about her integrity have cast a dark cloud over her candidacy and the Democratic Party would have preferred a candidate that was not susceptible to questions of character. I’m not convinced the animosity is worse than we have seen in other elections. It is intense, but not unprecedented.

You are a historian by training. Are there historical lessons that might help to clarify this unusual presidential contest?

I do think there are parallels if you go back to the turn of the 20th century with the emergence of a new Republican Party under William McKinley and, ultimately, the rise of Theodore Roosevelt to the presidency. Roosevelt combined the conservative, pro-business platform of Republican conservatives with reformers, who sought a government that would speak to the need for labor reform and represent the interests of all Americans. During this time, the Democratic Party was trying to find a path to bring their reform message to the voters but were unsuccessful in doing so, because Roosevelt stole their thunder. So unsuccessful were the Democrats, in fact, that they had to run the same candidate, William Jennings Bryan, in three separate elections and lost decisively all three times.

We have had an indication for some time now of a growing dissatisfaction among American voters. When Ross Perot ran for the presidency 24 years ago in 1992, he clearly touched a nerve in the American electorate. People were frustrated by the way Congress was managing the direction and financial well-being of the nation. And they were especially angry over the failure of the parties to address the needs of Americans. Perot was outwardly critical of both parties. In this election, both Trump and Bernie Sanders have spoken to the persistent frustration of voters with the political direction of the nation.

Florida has been called a microcosm of the U.S. How so and why is this significant?

Florida really gives us a view of the future of our country because of its ethnic and racial diversity. If you look at the various racial and ethnic groups that make up the Florida mosaic, you find people who span both the western and eastern hemispheres. Florida is showing America what the nation will look like in the near future. That is why the state is so important.

Do you believe Florida will be a key state in this year’s presidential contest?

No question. Florida is key because it is sharply divided politically and can easily flip from election to election, thus putting the state into play for both parties. If you look at the registration figures, the number of registered Republican and Democratic voters is fairly close, with the number of Democrats being slightly higher. But a growing number of registered voters in Florida are independents. These voters can sway the outcome of an election for either party. Florida is also critically important because of the number of electoral votes it has—29 in total—ranking third in the U.S. behind California and Texas. If you watch where the candidates are campaigning, they are repeatedly in Florida because of its importance.

This election may hinge on millennial voters. What is your prediction on youth turnout?

National youth voter turnout will be significant, even if it doesn’t match what we saw in the 2012 presidential contest. Millennials are frustrated by the two candidates. Their interests run in a different direction than those of the candidates, particularly in the Democratic Party where millennials were strongly in favor of Bernie Sanders and the platform he ran on. But I do think that there are a number of organizations, like the Graham Center, across the country that are working very hard to mobilize students on their campuses.

These efforts weren’t as apparent 10 years ago as they are now. The result then was that fewer young people showed up at the polls. There is a new emphasis on college campuses on becoming engaged and informed, and there is a renewed focus on civic responsibility—how participating in the process is critical to the future of our democracy. They have an opportunity to correct the mistakes of previous generations. Ultimately, I think this will persuade many millennials to participate even if they find themselves frustrated by the candidates and the candidates’ behavior.

Eighteenth century British author Samuel Johnson wrote, “When once the forms of civility are violated, there remains little hope of return to kindness or decency.” Do you agree?

I do. It’s troubling. I think that the incivility we have seen in this presidential campaign is likely to carry over to the relations between the congress and the next president. I think that’s particularly true if Congress is of the other party. Incivility prevents compromise and any effort to build productive relationships that could provide solutions for the well-being of the nation and its people. It is an ominous development for the future of our country. Hopefully, the millennials will prevent that from happening.