In 2015, realizing the Florida Museum of Natural History’s 100th anniversary as the state museum was fast approaching, employees wondered how to celebrate this centennial milestone. After many meetings and much deliberation, the Rare, Beautiful & Fascinating: 100 Years @FloridaMuseum exhibit was conceived.

Spearheading the project was exhibit developer Julie Waters. Although she has extensive experience curating exhibitions, even Waters was excited for the upcoming challenge.

Waters spent more than two years developing the exhibit and working with scientists to communicate their research to the public. The fruits of her labor were realized when the exhibit opened Sept. 23. With eight areas, 33 subthemes and more than 140 objects, Rare, Beautiful & Fascinating is an inclusive overview of the museum’s 17 collections and research initiatives addressing a variety of topics from extinction to biodiversity.

“This was one of the most comprehensive exhibits I have ever worked on,” she said. “I got a chance to work with curators, collection managers and other employees I have not collaborated with in the past.” 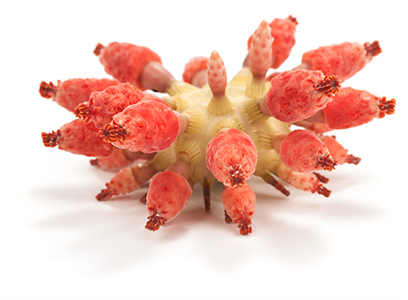 The process began with research staff nominating objects they felt represented the best of their collections, whether for scientific importance, attractiveness or intrigue. After a team narrowed the list, Waters interviewed the scientists to learn more about each item’s story.

“A lot of writing goes into creating an exhibit from scratch,” she said. “After gathering all available information on the specimens and artifacts, we compile a draft script, including all panels and labels.”

A background in geology, paleontology and science education helped her interpret the scientific information from researchers and accurately describe it in the exhibit for visitors.

“One of my favorite parts about how we designed the exhibit is that we did not section off the collections, but rather showed how varying disciplines can address the same scientific topics, each offering a unique perspective,” she said.

Waters said visitors are only scratching the surface of what the museum has in its collections. With more than 40 million artifacts and specimens, this exhibit gives guests the rare opportunity to view objects not normally displayed to the public.

In an effort to illustrate how the museum addresses major world issues, Waters worked with students from the University of Florida Institute of Food and Agricultural Sciences (UF IFAS) to produce videos for the exhibit. In addition, she created an interactive experience on a large touch table featuring research initiatives such as Integrated Digitized Biocollections (iDigBio).

She also worked with multiple departments throughout the museum since most of the elements were produced in-house.

“The photography department took beautiful imagery of all the objects; the web team then used those photos and recorded interviews to create a fantastic website and audio tour,” Waters said. “The graphics department worked with the exhibits team to come up with a cohesive design while the fabricators worked tirelessly to refurbish the display cases and prepare all the pieces. It really took a village!”

The Rare, Beautiful & Fascinating: 100 Years @FloridaMuseum exhibit is open through Jan. 7, 2018, at the Florida Museum. Admission is free.