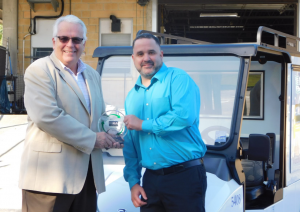 The recognition is the result of a number of sustainability-minded improvements undertaken by Central Stores over the past several years, which began with an interest to simply reduce waste but led to greater aspirations, according to warehouse manager Tommy Gonzalez.

Gonzalez said many materials received at the warehouse could not be handled through the traditional campus recycling program so Central Stores began internal recycling programs for batteries, ink cartridges, plastic film and pallets. By 2015, the warehouse had reduced the building’s landfill waste by 97 percent.

Enthused by this success, Gonzalez said the team began to analyze all aspects of their operations, starting with the facility itself. The 23,297-square-foot Central Stores warehouse was built in 1964 as a non-insulated brick building with a flat roof. Lighting and HVAC systems were inefficient and the building had no automatic control systems. The team began to implement every no-cost and low-cost improvement they could identify.

In 2013, Central Stores decided to enter into the EPA Battle of the Buildings Challenge. By 2015, the building became Energy Star-certified—the first one on UF’s campus.

In 2016, photovoltaic panels were installed on the warehouse roof that will generate 14 kW energy to offset energy use. Surplus energy will be fed back into the campus grid. The warehouse has become a flagship for sustainable operations at the university.

National Recycling Coalition Outstanding Higher Education Award for UF’s ongoing efforts to combine research, outreach and practices to reduce waste. While UF leads Florida in university and college waste diversion/recycling rates, the entire state is struggling to meet the 75-percent recycling goal. UF researchers are exploring which recyclables would result in the greatest life-cycle reductions in greenhouse gases, in order to focus programs on those materials.

Central Stores became a Certified Energy Star building with an overall score of 90.

EPA Battle of the Buildings #1 in Warehouse in a competition of more than 3,000 buildings to reduce energy and environmental impact. Central Stores reduced energy use by 20 percent. In 2014, they cut energy and water costs by an additional 53 percent and another 30 percent in 2015.