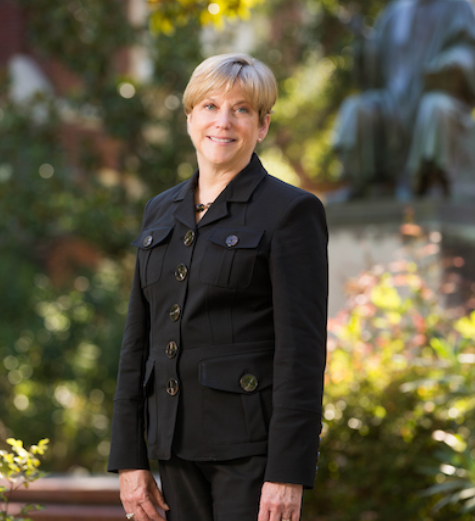 After more than 13 years of exemplary service at UF, Vice President for University Relations Jane Adams will retire at the end of the month.

A trusted leader at UF since 2004, Adams has provided guidance and vision in government relations, public relations, marketing, crisis communication and external relations at the local, state and national levels and has helped develop UF’s national recognition, enabling it to become a top-10 public research institution.

Adams’ vision and knowledge also led to the creation of campaigns such as “The Foundation of The Gator Nation” and “Gator Good,” which have raised UF’s stature and visibility, and her seasoned counsel and thoughtful direction helped guide UF through some of its most challenging crises.

Prior to joining UF, Adams served as vice president of Government Relations and manager of Media Relations for Walt Disney World; director of Communications and Public Relations for Disney Cruise Line; co-creator and administrator for the Disney Wildlife Conservation Fund; vice president of Media Relations in the Washington, D.C. office of Burson-Marsteller; and press secretary in the U.S. Senate, working for Senators Ted Stevens and Frank Murkowski of Alaska.

Adams is the immediate past chair of the Florida Chamber of Commerce Foundation and currently serves on its board of trustees. She is also the immediate past chair of the Women’s Leadership Council for the United Way of North Central Florida and was appointed to the Governor’s Commission on Volunteerism and Service. She graduated from Iowa State University with a bachelor’s degree in journalism and political science.