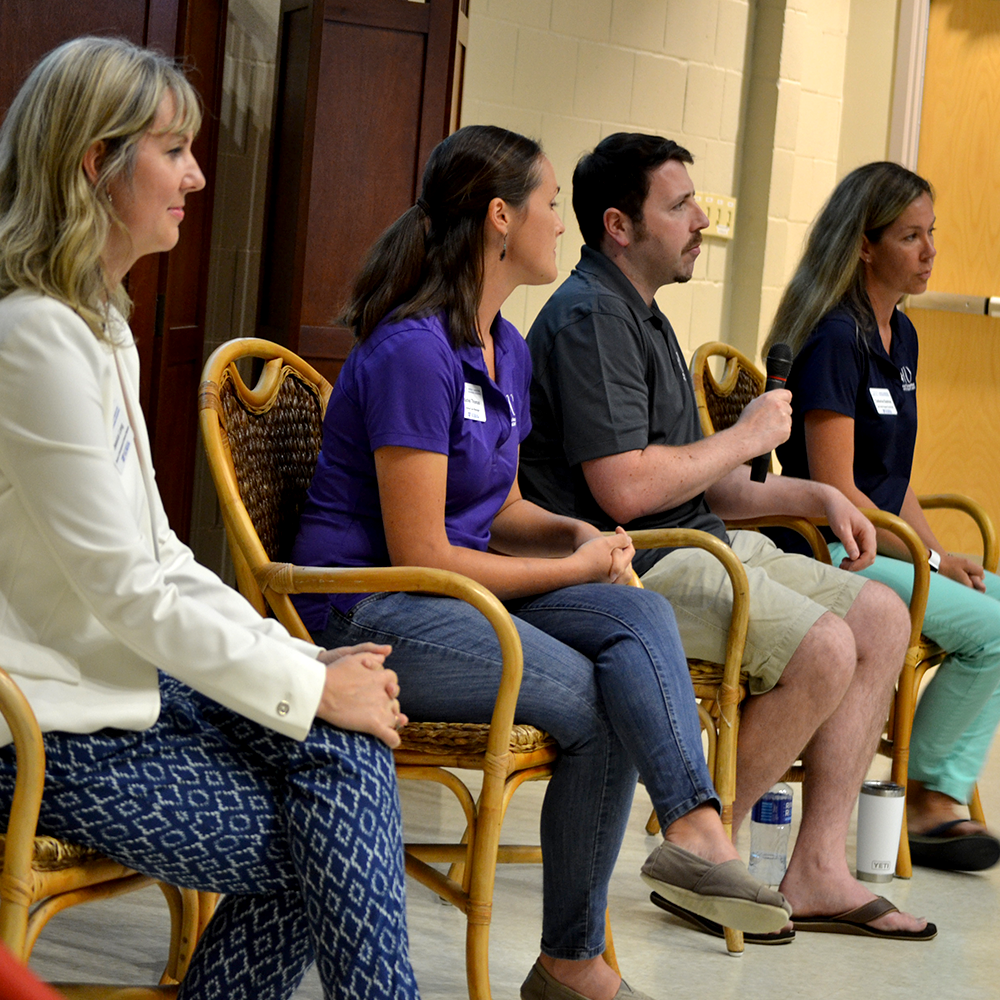 For the Sea Turtle Hospital team at UF’s Whitney Laboratory for Marine Bioscience in St. Augustine, work is not just a job; it’s a lifestyle.

Directed by Dr. Mark Q. Martindale, the Whitney Lab uses marine model animals to study fundamental problems in biology and apply that knowledge to issues of human health, natural resources and the environment. The laboratory is home to nine research laboratories as well as the Sea Turtle Hospital, which opened its doors in October 2015.

Eastman said that the forming of the hospital was the result of “a perfect storm.” A former marine turtle specialist in Boca Raton, Eastman was living and working in the St. Augustine area when she began seeing sea turtles there with a disease called fibropapilloma (FP). FP, which produces debilitating tumors on the bodies of juvenile green sea turtles, was common among turtles in South Florida but not yet seen farther north.

“I started seeing the issue and thought, do we need a sea turtle hospital for FP in Northeast Florida, too?” Eastman said.

She approached Burkhalter, her pets’ longtime veterinarian, and Terry Norton, of the Georgia Sea Turtle Center, and they began to explore how to make a new sea turtle hospital a reality. An initial donor, a UF alum, suggested the Whitney Lab as the perfect place for the hospital to be housed, and after discussions with Martindale and others, the plan for the hospital was born.

“As a marine lab, the Whitney Lab has the best water quality we could ask for and it’s a research institute,” said Eastman. “It truly was the right place at right time in the best possible location.”

A haven for area sea turtles

Before the Sea Turtle Hospital opened, sick and injured turtles in the Nassau, Duval, St. Johns and Flagler county areas had to be transported to facilities in Georgia or Central Florida for care and often spent hours in transit—a window of time critical to their survival. Additionally, none of the hospitals could take or treat turtles with FP. Since opening in 2015, the team has successfully rehabilitated and released 19 sea turtles back into the ocean.

“In the rehab world, you don’t always have the best numbers,” said Rollinson. “We’re treating animals for an intensive, rough disease so our success numbers are naturally lower. We are proud of those 19 successes.”

The team, which works closely with the Florida Fish and Wildlife Conservation Commission (FWCC), exclusively cares for turtles with FP, which is the most significant infectious disease among sea turtles in the region. Related to the herpes virus, FP produces large tumors that can impact turtles’ mobility, quality of life and even their ability to see, as tumors sometimes form on turtles’ eyes. Baby turtles, or hatchlings, and adult turtles don’t tend to be affected by the disease, which most closely resembles skin cancer in humans. Green sea turtles develop tumors in adolescence, which is typically when they travel back from the middle of the ocean to the coast.

Usually, six to 10 sea turtles are being treated at the hospital at any one time. The turtles live in one of the facility’s four 1,100-gallon tanks while they are at the hospital receiving treatment. Their care is designed with their eventual release in mind, so the staff are careful not to cause the turtles to become too dependent on them to survive. The turtles forage for food, which is creatively placed in their tanks by staff, and their water is kept at the same temperature as nearby ocean water. 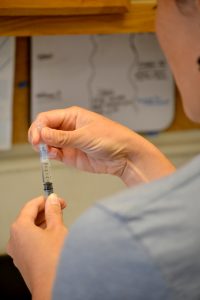 Staff remove the turtles’ tumors with a CO2 laser, which was gifted to the hospital by a generous donor and results in less inflammation and blood loss and a quicker healing time than other surgical approaches. The team is researching the use of a chemotherapy drug for use post-tumor removal to potentially lessen the high likelihood of tumor regrowth.

Once resident turtles have had their last surgery and recovered with no new tumors or regrowth, provided their immune system is healthy, they are ready to go back home. The team notifies the state and the FWCC, which gives them a precise location for release. Releases tend to be celebratory events with staff, volunteers and community members there to send off the rehabilitated turtle on its journey home. The turtles receive transponder tags, similar to a microchip in a dog or cat, and larger turtles get flipper tags, too, so the hospital can track them over their lives.

Teaming up with researchers

One of the big questions the team is exploring is: “Why now?”

“The virus itself has been around forever, so what is triggering these tumors now?” asked Thomas. “What is causing changes in the turtles’ cells that is making these tumors grow?”

FP was first documented in sea turtles in Key West in the 1930s. In the 1980s and 1990s, cases of FP began increasing among sea turtles primarily in Hawaii and the Florida Keys. The disease has been spreading steadily since then and now affects sea turtles in all of the oceans of the world.

“We know that the disease has really taken off since humans have had more of an impact on the environment,” said Thomas. “Tumor disease rates are higher in areas where there is more agriculture runoff; the higher the pollutant rate, the higher the rate of FP.”

The team is working with Dr. David Duffy, a cancer molecular biologist, and other Whitney Lab researchers to better understand the virus, come up with effective treatments and hopefully one day apply the knowledge to human health.

Duffy’s expertise has recently led to a study exploring the role of UV radiation and tumor growth.

Eastman and the team are quick to point out the support they have received from hospital volunteers, local organizations and partners on UF’s main campus, such as UF’s Archie Carr Center for Sea Turtle Research.

“This all started with the community,” said Eastman. “There was a real community push to make the hospital happen.”

For example, the St. Augustine Alligator Farm donates fresh produce to feed the resident turtles; Del Mar Veterinary Hospital, St. Johns Veterinary Hospital and a local human imaging center provide the team with free use of their X-ray and CT scanners; and the UF Pathology Lab provides diagnostics and skilled expertise. Every partnership allows the team to do the high-quality work that they do, said Eastman. 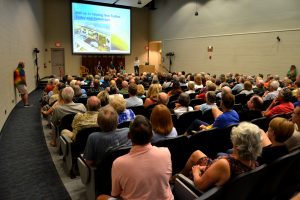 “We’re one of the smaller sea turtle hospitals,” said Rollinson. “We’re the new kids on the block, and hearing positive feedback from other facilities who have been around for years has been really amazing to experience.”

Added Thomas: “It’s incredibly rewarding, and everyone can have an impact on these animals. We try to drive that home—even if you don’t live near the ocean or have never seen a sea turtle in the wild, there are little things you can do to help them and make their lives better.”

Conservation tips from the team

To learn more about the Sea Turtle Hospital or get involved, visit https://www.whitney.ufl.edu/sea-turtle-hospital.